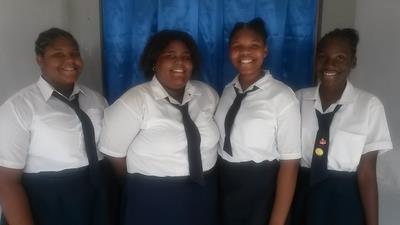 The inhabitants of Dominica are no strangers to natural disasters, and the island has always been especially vulnerable to hurricanes and tropical storms. But Hurricane Maria, in September last year, eclipsed all other natural disasters in the country’s history.

Within just a few hours, torrential rain and 160mph winds tore off roofs, smashed through walls, uprooted trees and lifted roads. Communication towers snapped in two, schools were flattened and electricity cut. Nothing was spared. 95 per cent of the island’s buildings were damaged or reduced to rubble, with roads and communication completely cut off. The island’s economy, which depends on agriculture and tourism, was ruined overnight.

Ava, a 16-year-old CGEF-sponsored student, explains that for her 2017 was a ‘bittersweet’ year. The new school year in September got off to a fantastic start. She was doing well in her studies and was determined to pass her CSEC exams at the end of the year. She had been struggling with migraines over the previous year, which had affected her school work, but things were back on track and she was working hard towards her dream of becoming a marine biologist.

‘This went on for seven days, then, on 18 September 2017, Hurricane Maria, a category 5 hurricane struck Dominica. The hurricane changed everything and affected me both directly and indirectly. The island was damaged terribly. Though I did not lose my house, nor was it damaged, I was left without running water for two and a half weeks, and currently [when she wrote to us three months later] no electricity.’

Her school was forced to close, and when it reopened a month later her classroom had been destroyed. But Ava was determined not to let it affect her education. With no electricity in her village, she stayed at school in the evenings to do her homework.

The CGEF began sponsoring Ava in 2014 when she was 12 years old. As she explained when she first wrote to us then: ‘This scholarship opportunity may change my life drastically for the better … My mother has been struggling financially ever since I was a young child. She raised and supported my sister and me as a single mother. My mother is not a wealthy woman with a high pay check. She is a hard working waitress, who always puts both my sister and me before herself, providing us with shelter, food and a great education. I am very thankful to my mother for where I am today. I have made my mother proud by keeping good grades.’

Sadly, like so many Dominicans, Ava’s mother lost her job in a local guest house as a result of the hurricane, which has put an even greater financial strain on the family.

Ava’s classmate Courtney also comes from a single-parent family. Her father works with government and often struggles to cover the school fees for all four of his children. But Courtney is one of the brightest students in the school, and is working hard towards her ambition to study medicine.

She also wrote to us about the effects of the hurricane: ‘This hurricane heavily impacted the way of life of many citizens, myself included. This tragedy directly affected me as it removed the roof of my home … The storm did not spare many parts of the island, my school was one of the many buildings affected … Despite the circumstances, I have managed to remain focused on my school work and maintain my academic standards. In the near future, I see myself in a position where I am helping others while pursuing my dream of becoming an obstetric gynaecologist. I aspire to remain focused on my desired career, all while enjoying the things I love most, such as reading and seeing new places.’

We had no hesitation in recently renewing our sponsorship of Courtney, Ava and a number of their classmates. Despite the tragic impact of the hurricane, all the girls remain optimistic about the future.

As Ava writes: ‘Though I have faced many hindrances over the past year, I am a determined student and I will never stop working hard.’ The CGEF scholarship will ‘allow me [to] become the best version of myself.’ There can perhaps be no greater hope for all our girls, wherever they are in the world, and whatever disasters or obstacles might stand in the way of their education. With the support of the CGEF they can be the best versions of themselves.