Louisa Service, who died on 22nd September, was the longest-standing trustee of the Commonwealth Girls’ Education Fund and a much-loved friend and inspiration to all of us who worked with her. Throughout her life, Louisa was passionate about helping others, especially young women.

As the daughter of the CGEF’s founder Alice Hemming, Louisa grew up understanding of the importance of feminism and education from a young age. She was proud to continue her mother’s work for the Commonwealth Countries League and the CGEF. It meant a great deal to her that she was instrumental in giving thousands of girls a chance they would not otherwise have had. By educating young women, she knew that she was helping them to believe in themselves.

Louisa was re-elected to the Board of the CGEF (then the CCLEF) in October 2014, but she had been involved with the charity since its inception. She always helped with the annual Commonwealth Fair to raise funds for the CGEF, which for many years used to take place at Alice’s home in Primrose Hill. Louisa was the inspiration behind the Friends of the CGEF, and became the charity’s first Friend. She often hosted our away days at her home. In the last months of her life, when she was no longer able to continue as a Trustee, she was delighted to accept the invitation to become a Patron of the charity.

Louisa Anne Hemming was born in Paris on 13th December 1931. Her father Harold was a merchant banker and was soon posted to Berlin. After Hitler came to power the family settled in Primrose Hill in London. But in 1940, to escape the Blitz, Louisa and her young brother John were sent to live with their grandparents in Canada. Louisa became well used to travelling, and was extremely self-reliant, much like her mother. During the war, Alice worked as a journalist promoting the British war effort and Harold lectured on the latest artillery techniques, travelling from base to base around North America with the family in tow.

When things settled down after the war they returned to Primrose Hill, and despite Louisa’s interrupted education, she gained a place at St Hilda’s College, Oxford, where she read PPE. After graduation in 1959, she married Alistair Service, and both joined their own family publishing companies. Their son Nick was born in 1961 and a daughter Sophie two years later. The 1960s was a time of emerging ideas about the role of women and human rights, something Louisa cared about very deeply. Louisa campaigned on law reform, particularly in relation to abortion rights and divorce. She was hugely involved in the feminist and women’s movements in the 1960s and 1970s, and Nick and Sophie remember spending a fair amount of their childhoods on marches.

One of her greatest achievements was her work to reform the juvenile and family courts.  Her career as a Justice of the Peace spanned over three decades and large parts of London, from Hackney to Hammersmith and beyond. As a very senior magistrate and Chairman of the Executive Committee she worked to reform the family and juvenile courts to make the process less punitive and more humane by concentrating on the welfare of the family, particularly the best interests of the children.

Music was another great passion of Louisa’s, and so it was natural for her to want to extend opportunities for young people who wouldn’t normally have had access to classical music. She became actively involved in Youth & Music and the Elsa Mayer Lismann Opera workshops. Louisa was publicly honoured for this, and her juvenile court work. When she was awarded an OBE in 1997 the citation was ‘for services to music and youth’. Louisa was also greatly involved with other music-related charities from the Chairman’s Committee of the Friends of Covent Garden to heading up the fundraising for the new Jacqueline du Pré Music Building at her university college, St Hilda’s.

Louisa was also joint Chairman of the Hemming Group from 1976 to 2012, and she worked voluntarily for many more organisations. In addition to her work with the CCL and CGEF, she was director of St Hilda’s, Honorary Secretary of the Women's India Association, member of the Council of the Friends of Covent Garden, and judge for the Historical Dagger Awards of the Crime Writers’ Association, to name but a few. In everything she did, her concern was for people to be given the opportunity to thrive, but she was very aware of how difficult this is - particularly for young women.  She had her birth, connections and education that enabled her to do what she did. But she was all too aware that others were not so privileged.

Louisa loved travelling and meeting new people. It never occurred to her not to take an interest in everyone she met, and people were drawn into her orbit. She became an adopted mother figure to many different people through her life. Louisa will be greatly missed by all of us at the CGEF, by her family and by her many friends in the UK, the Commonwealth and around the world.

A massive THANK YOU to all of our participants and supporters who gave up their time to walk or run for the CGEF! 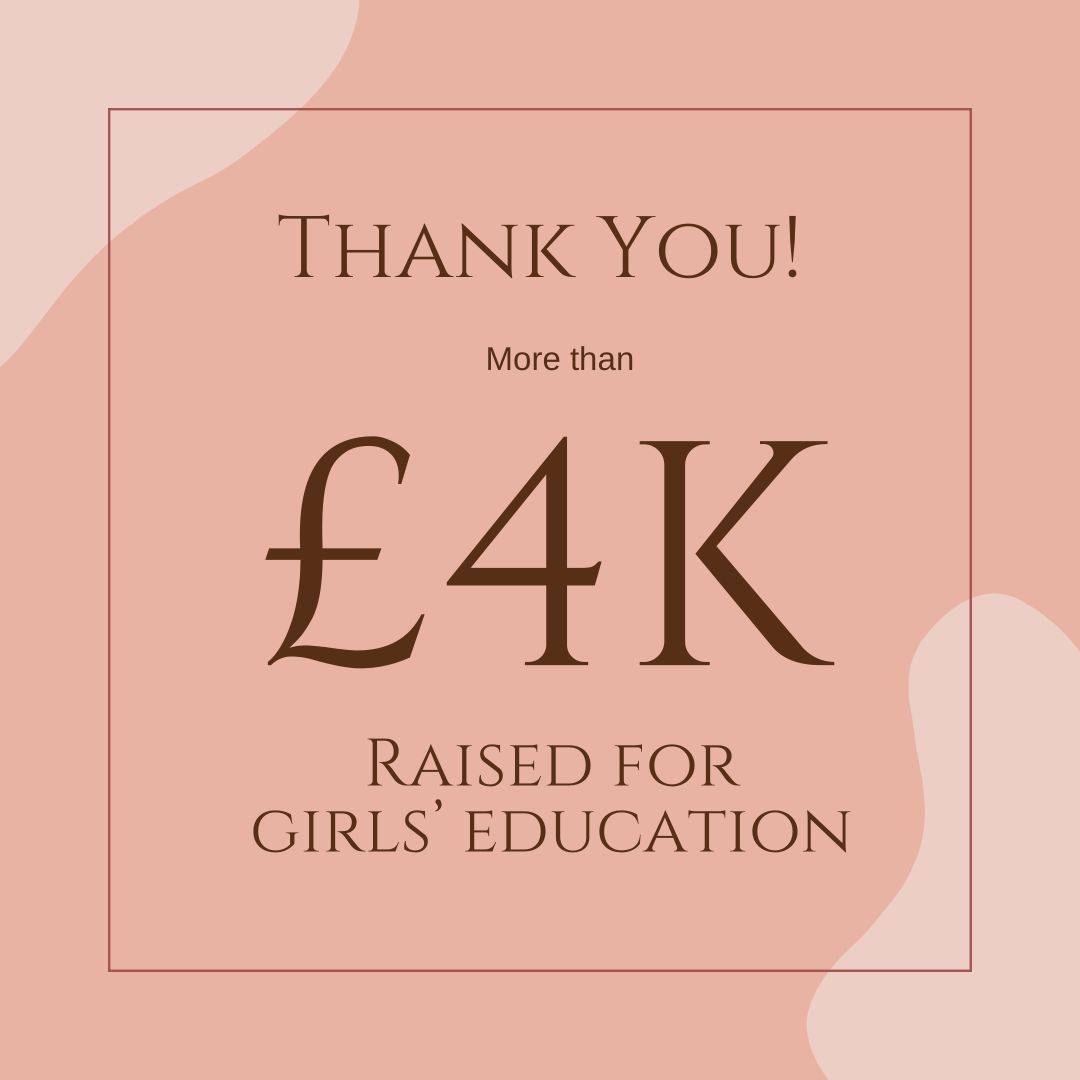 Here’s how to get involved:

It’s really that simple - only £50 and 13,000 steps could help us make an invaluable difference to the lives of bright but disadvantaged girls across the Commonwealth.

So let’s get moving. Email for more information. 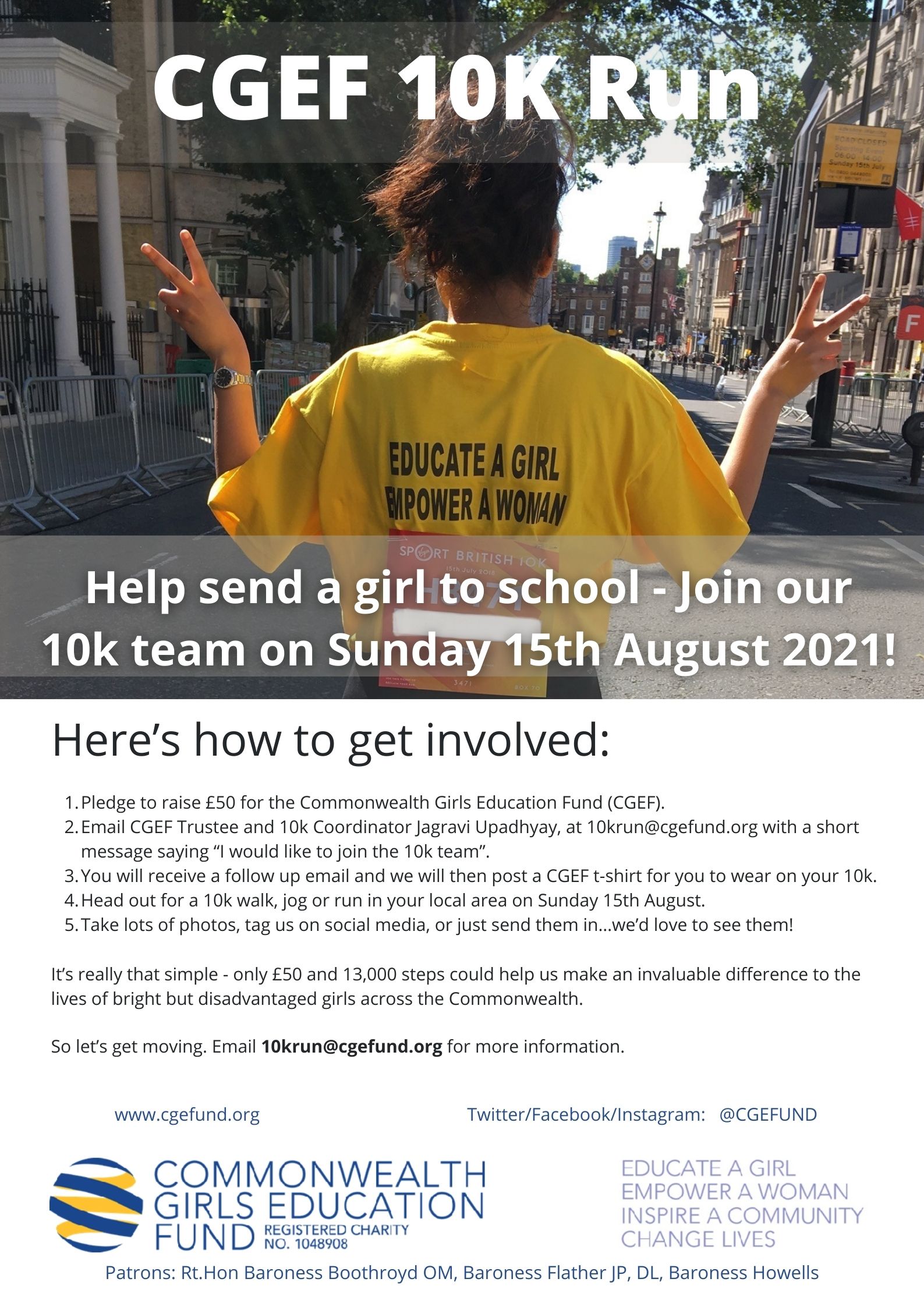 CCL presents the CGEF with a 20K donation 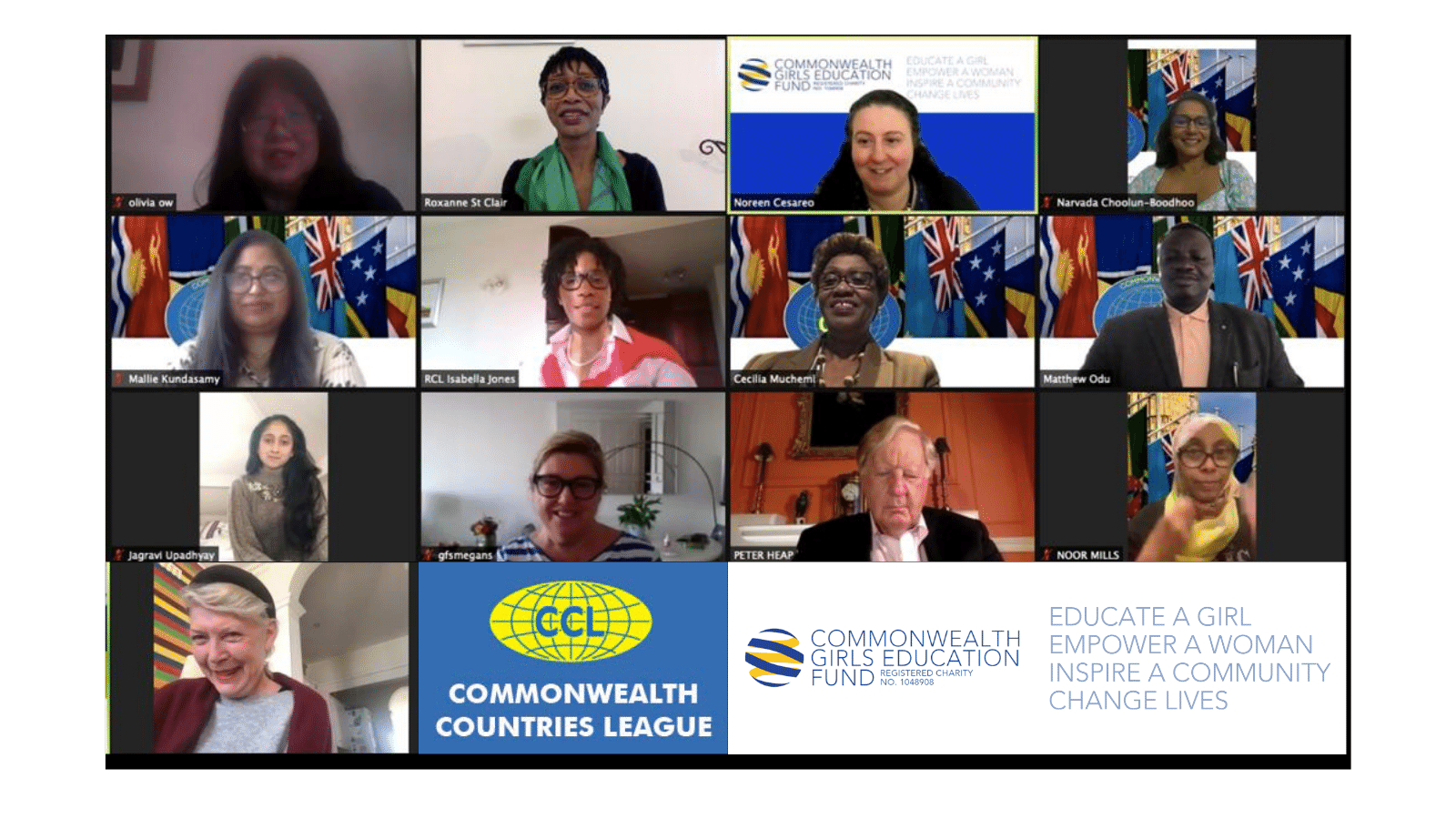 The Board of Trustees and the Executive Committe of the Commonwealth Countries League (CCL) presented CGEF Trustees with a generous donation of £20K in lieu of funds which would have been raised at the Annual Commonwealth Fair. The fair is organised by the CCL and typically held in the month of November at the Kensington Town Hall in London, UK.

Chairwoman Cecilia Muchemi presented the cheque to the CGEF  Trustees during March - recognised internationally as the women's month - and in celebration of the International Women's Day and Commonwealth Day, which were both held on the same day this year.

Chair of the Trustees Sir Peter Heap represented the CCL Board of Trustees and said that they are still committed to supporting the CGEF cause in line with their values and mission.

At CGEF we sponsor the secondary education of hundreds of able but financial deprived girls who would otherwise not have had the opportunity to receive an education.

Despite the challenge of a global pandemic, many of the girls we support have successfully passed their National exams and are now aspiring to higher education. 🏫

🙌 We are proud of their resilience and ⭐ celebrate all our girls, and the many women who support us around the Commonwealth 🌎

International Day of the Girl Child 2020

11th October marks the International Day of the Girl Child. Watch the video below to hear why we at the CGEF believe education is important to us,

News from our Girls